This fine white glass vase is an opaque jade color, created by being blown into a mold then carefully polished. It replicates the smooth texture and translucent light greenish white luster of nephrite.

Etching and aquatint in turquoise on wooden veneer.

This long-necked cloisonne vase, covered with geometrical borders and floral patterns in pink & red enamel on the neck, is a striking example of Japanese export craft items in the 19th century.

Bronze and favrile glass blown at Tiffany Studios. The unique pearlescent shades are created using a method developed by Arthur Nash, allowing different colors of iridescent glass to be combined in a molten state. The glass is then blown to achieve various effects of color, shape, shading and texture. “Favrile” is a marketing term that Tiffany coined to recall the Old English word for “febrile” (hand-wrought). 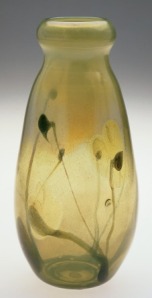 A delicately balanced sculptural composition constructed of wire and sheet metal, this piece is one of the largest mobiles Calder has created to date.

This folk art room was badass!